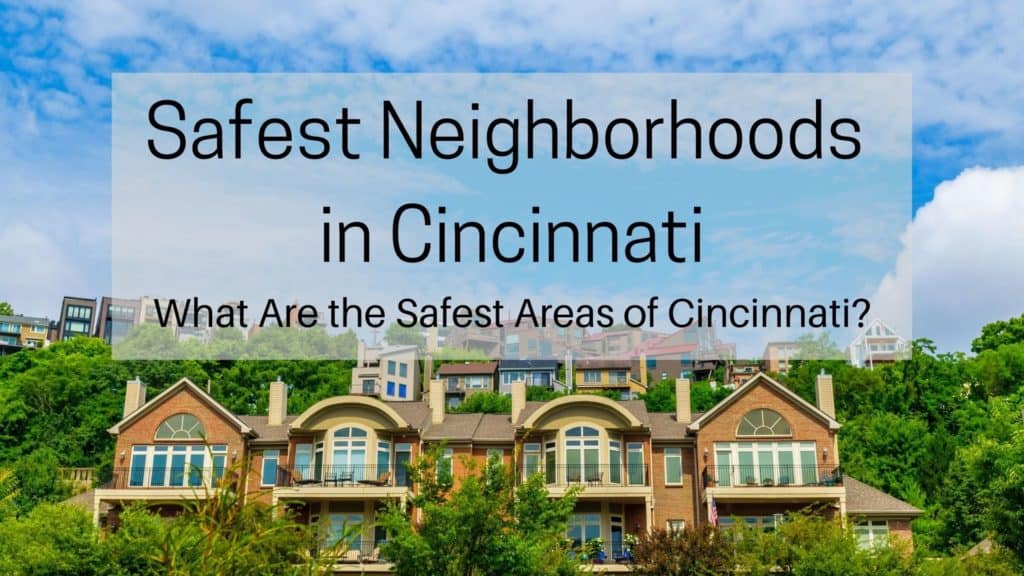 Safest Neighborhoods in Cincinnati [2022] | What Are the Safest Areas of Cincinnati?

As you decide where you want to live, safety is definitely a big priority. While Cincinnati isn’t one of the country’s safest cities, it’s also a far cry from cities like Chicago with many neighborhoods and suburbs that are low crime and great for families and millennials.

What are the best places to live in Cincinnati? Whether you’re settling down in retirement, raising a family, or just want a neighborhood where you feel safe walking at night, here are the safest neighborhoods in Cincinnati to put on your list.

Is Cincinnati a safe place to live? That’s a big question as you consider whether the city is right for you — and where you will ultimately settle down.

Cincinnati was once ranked as one of America’s most dangerous cities for violent crime, particularly firearm violence. While Cincinnati still has higher-than-average crime rates, it’s important to understand that about half of all serious crime is concentrated in just 10 of the city’s 53 neighborhoods. The Cincinnati Police Homicide Unit also has a very good closure rate which means suspects are usually arrested and charged. Many areas of Cincinnati are actually very safe and crime is down 10% year-over-year.

When it comes to avoiding crime, it’s all about where you decide to live. You can use this tool from the City of Cincinnati to search reported crimes by type and neighborhood to get a better insight into the city’s crime stats.

When it comes to avoiding crime, it’s all about where you decide to live. Here are the safest areas in Cincinnati that may be the community of your dreams.

Hyde Park ties with Sayler Park as the safest Cincinnati neighborhoods. Crime is very limited and usually involves property crimes, not violent crime. Between 2016 and 2020, there were 1,553 police-reported incidents: all but 39 involved property or minor crimes.

Hyde Park is also one of the city’s most vibrant and beautiful neighborhoods. This affluent community seemingly has it all: amazing galleries, restaurants, shops, and nature with a suburban, walkable layout. It’s home to the Cincinnati Observatory and two country clubs and centered around Hyde Park Square.

Think Hyde Park might be for you? Check out this ultimate guide to living in and moving to Hyde Park, Cincinnati.

Sayler Park is a unique riverfront neighborhood that stretches along the banks of the Ohio River on Cincinnati’s west side. This large 2,068-acre park was annexed to the city in 1911 as the Village of Sayler Park and is today known for its charming, small-town atmosphere, safety, and rich history.

Sayler Park is a great place to live if you want quiet, suburban life. It’s home to Cincinnati’s longest active garden club, a recreation center, and tons of great parks to explore with riverfront access. There are only 13 crimes per 100 people in Sayler Park and most of them are property crimes, not violent crime.

Mt. Washington is home to the Athenaeum of Ohio, one of the country’s oldest Catholic seminaries. Franciscan Monks bicycling and walking through the neighborhood are a common sight. Find out more about what it’s like to live in Mt. Washington here!

Located just 10 to 15 minutes from downtown Cincinnati and the exciting nightlife of Over the Rhine, Mt. Lookout is one of the safest neighborhoods to live in Cincinnati. Between 2016 and 2020, there were just 1,849 police-reported incidents in Mt. Lookout and all but 19 were minor or property crimes.

Mt. Lookout has one of the most unique town squares in Cincinnati with boutiques and restaurants anchored by the historic Redmoor building. The neighborhood is also home to fun parks like Alms Park on the edge of town which has some of the city’s best views of the river.

Kennedy Heights doesn’t get much attention but it’s one of safest neighborhoods in Cincinnati and farther into the suburbs. This small residential community is located next to Silverton and Pleasant Ridge with a population of nearly 5,000. Kennedy Heights has a history going back to 1965 when it was created as an intentionally integrated community to fight blockbusting. Located conveniently between I-71 and Route 3, you’ll be just 12 miles from downtown Cincinnati but with a laidback suburban lifestyle.

Kennedy Heights is a popular neighborhood in Cincinnati for families and home to Daniel Drake Park, a 66-acre park with playgrounds and an overlook. It’s also the most affordable Cincinnati neighborhood on this list!

Want a walkable and urban neighborhood and low crime? Put Mt. Adams on your list of safe neighborhoods in Cincinnati! This hilltop neighborhood is notable for its European feel with large and elegant parks, eclectic boutiques, and a walkable layout. It’s also fairly small with just 1,700 residents who are mostly younger for a very laid-back vibe.

Mt. Adams is one of the hippest neighborhoods in Cincinnati with mostly younger residents, many of whom work in the nearby Central Business District downtown. The neighborhood straddles the Ohio River between I-471 and I-71 for convenient access to all of the region’s attractions. It’s also home to popular landmarks like the Cincinnati Art Museum and Eden Park, one of the city’s most picturesque and popular parks. Eden Park features over 100 events every year, Krohn’s Conservatory, a playground Mirror Lake, and Twin Lakes.

As you decide where to settle in the city, it definitely helps to know the areas to avoid in Cincinnati. The following Cincinnati neighborhoods to avoid are considered the most dangerous with the highest crime rates, although they aren’t all necessarily violent crime.

While English Woods has a frighteningly high rate of crime, the crime rate actually decreased by 17% in 2019.

Cincinnati is a relatively safe city although parts of downtown do have higher crime rates. Some areas of downtown, including the north part, have higher rates of gun violence and property crime.

What parts of Cincinnati should I avoid?

Some areas of Cincinnati with high crime rates late at night include Over the Rhine, Vine Street, Avondale, Westwood, and English Woods.

Is it safe to live in Cincinnati, Ohio?

Cincinnati is generally considered a safe city to live. Violent crime tends to be clustered in certain high-crime neighborhoods and other crime outside of these areas is usually minor or property-related.

Have you settled on a great and safe neighborhood in Cincinnati to call home? The award-winning Cincinnati moving services at Bell Moving & Storage are here to help when you’re ready with top-notch customer care.