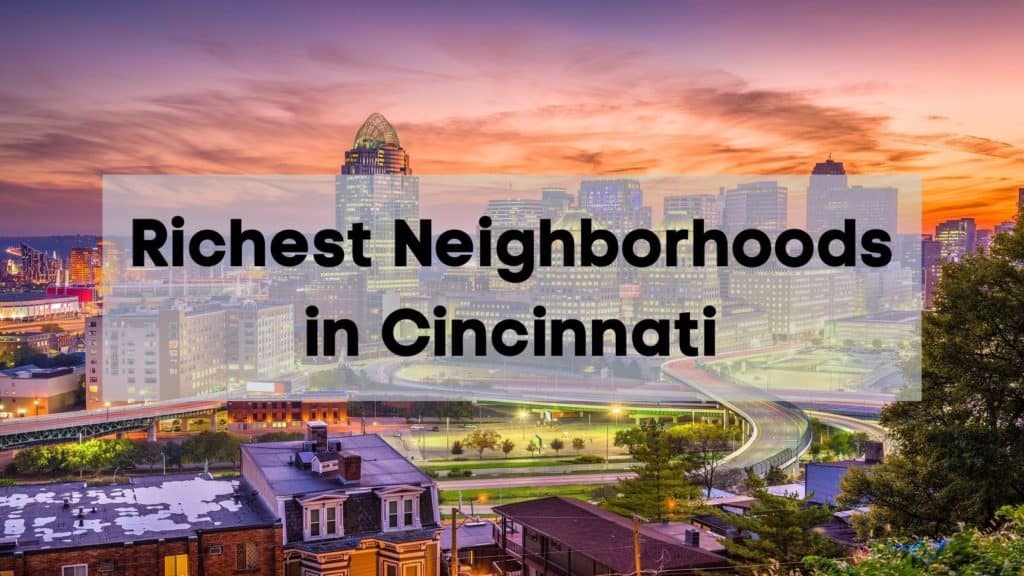 Moving to Cincinnati or just planning a visit? You may be curious about the nicest neighborhoods, the best areas to live and visit, and the wealthy parts of Cincinnati.

Cincinnati isn’t one of the richest cities in Ohio, and it isn’t even the most affluent city in Greater Cincinnati or the Tri-State area. However, its low cost of living and affordable home prices mean even modest income goes far.

What is the richest neighborhood in Cincinnati? Here’s a look at the top ten rich neighborhoods in Cincinnati based on median household income. You’ll find this list includes a combination of very safe, residential areas and fun urban neighborhoods with luxury, nightlife and walkability!

California is better known to locals as Grove Park, the original name for Coney Island, the water park the neighborhood is centered around. The water park, Belterra casino, and Riverbend Music Center, one of the city’s largest music venues, have earned the neighborhood the nickname of Cincinnati’s Playland. You’ll find this neighborhood where the Ohio River and Little Miami River meet next to Anderson Township, the East End, and Mt. Washington.

Mt. Adams is second on the list of richest neighborhoods in Cincinnati, but it ranks first for mean income of the wealthiest residents. The top 5% of households in Mount Adams earn a mean $909,500 per year compared to $309,000 among Cincinnati’s top 5%. The neighborhood’s median household income approaches the six-figure mark and it’s 185% over the city median.

#3. Mt. Lookout – One of the Richest Neighborhoods in Cincinnati with a Walkable Business District & High Home Prices

Mount Lookout is one of the best places to live in Cincinnati for young professionals thanks to its ideal location just 10 minutes from downtown with hangout spots, bars, and sushi joints all within walking distance. About 1 out of every 3 Mt. Lookout residents is a younger adult between 22 and 39.

#4. Hyde Park – One of the Best Places to Live in Cincinnati Known for Its Affluence, Private Schools & Square

Hyde Park has some of the best schools in the city including numerous private schools like St. Ursula Villa and Springer School and Center. It’s known for its beautiful homes with Tudor and Victorian Architecture and some of the top Cincinnati landmarks and cultural attractions like the historic Hyde Park Square and the Cincinnati Observatory. There are two country clubs in Hyde Park along with art galleries and upscale restaurants with the University of Cincinnati and Xavier University minutes away.

Nestled along the Ohio River across from Newport and Covington, Kentucky is Cincinnati’s Central Business District. Median household income drops significantly from fourth to fifth on this list of rich neighborhoods in Cincinnati, but downtown residents still have a median income higher than the national average and enjoy a low cost of living. You’ll find a range of renovated, amenity-packed condos downtown in the $200s and $300s.

The heart of Downtown Cincinnati, the Central Business District is the entertainment, sports, and business hub for the city. This bustling neighborhood always offers something fun to do.

Over-the-Rhine or OTR, the main nightlife destination in the city, is a short walk away. Along the riverfront is Smale Park and The Banks, a waterfront entertainment district with sports stadiums and a brand-new music venue. Catch a Reds game at the Great American Ball Park and cheer on the Bengals at Paul Brown Stadium just blocks away. Stop by the iconic Fountain Square almost any day of the week for community events like ice skating, live music, and food festivals. The Central Business District also hosts the city’s Oktoberfest every year!

#6. East End – One of the Most Expensive Neighborhoods in Cincinnati with Waterfront Homes & Great Views

This V-shaped neighborhood stretches and winds along the Ohio River east of Mt. Adams all the way to California and Mt. Washington. Once the heart of Cincinnati’s manufacturing industry, it has seen major redevelopment in recent years. Residents enjoy an assortment of beautiful parks, miles of trails, and historic Victorian architecture and churches with a walkable business district home to bars, coffee shops, and family-owned restaurants. The 238-acre Otto Armleder Memorial Park & Recreation Complex is one of the neighborhood’s highlights and one of Cincinnati’s best dog parks.

One of the smallest Cincinnati neighborhoods by area with just 0.5 square miles of area, Paddock Hills bills itself as “the best kept secret of Cincinnati.” This safe community is affluent by Cincinnati standards with higher-than-average home prices. It’s best known for its historic homes and beautiful architecture with Dutch Colonial, bungalow, and Tudor Revival homes.

This Cincinnati neighborhood next to Hyde Park and Pleasant Ridge has completely transformed itself over the past two decades and is now a popular destination for nightlife and entertainment. One of the main crosstown arteries to downtown, Oakley is home to Oakley Square, the main business district, plus two shopping centers like Oakley Station and Hyde Park Plaza just to the south. Families and millennials appreciate the breadth of nearby amenities and family-friendly activities like the Urban Air Adventure Park and the Oakley Playground. The neighborhood is known for its popular Oakley After Hours street festival held every month with drink and food specials, live music, and activities.

A post shared by Boulevard at Oakley Station (@blvdatoakley)

#9. Mt. Washington – Affordable Riverfront Community & One of the Nicest Neighborhoods in Cincinnati

One of the largest Cincinnati neighborhoods is also one of its most affluent, yet it remains affordable with an average home price well below the national average. Mt. Washington, Cincinnati is on the east side, generally considered the “rich side of town,” next to the wealthy East End and California neighborhoods right on the Little Miami River. The community is known for its small businesses and commercial areas. It was here that Gold Star Chili was founded, now one of the most recognizable brands of Cincy chili. Residents enjoy great amenities like the Mt. Washington Recreation Center and the wooded California Woods Nature Preserve.

The median household income in Kennedy Heights is just slightly above the U.S. median ($55,300) and the Midwest ($53,600), but the low cost of living in Cincinnati means that income still goes far.

Kennedy Heights is almost entirely a residential community and rounds out the list of wealthiest neighborhoods in Cincinnati. It’s also one of the best neighborhoods in Cincinnati for families thanks to its low crime, excellent schools, and outdoor recreation. The community is home to the Woodford Academy magnet school, the Kennedy Heights Montessori Center and the Roman Catholic Summit Country Day School, among the top schools in the city. Residents love the well-maintained Kennedy Heights Park and the quiet, forested Daniel Drake Park with the Kenwood Mall just minutes away.

Located at the edge of the city limits next to Silverton and Pleasant Ridge, Kennedy Heights offers all the perks of living within minutes of downtown with the safety, green space, and comfort of the suburbs.

Map of Rich Neighborhoods in Cincinnati

Does living in one of these wealthy neighborhoods in Cincinnati sound perfect for you? Once you’ve chosen the right community to call home, Bell Moving & Storage is here to help. Give us a call to discuss an upcoming relocation with our team of 5-star movers who will have you settled in without the stress and hassle.