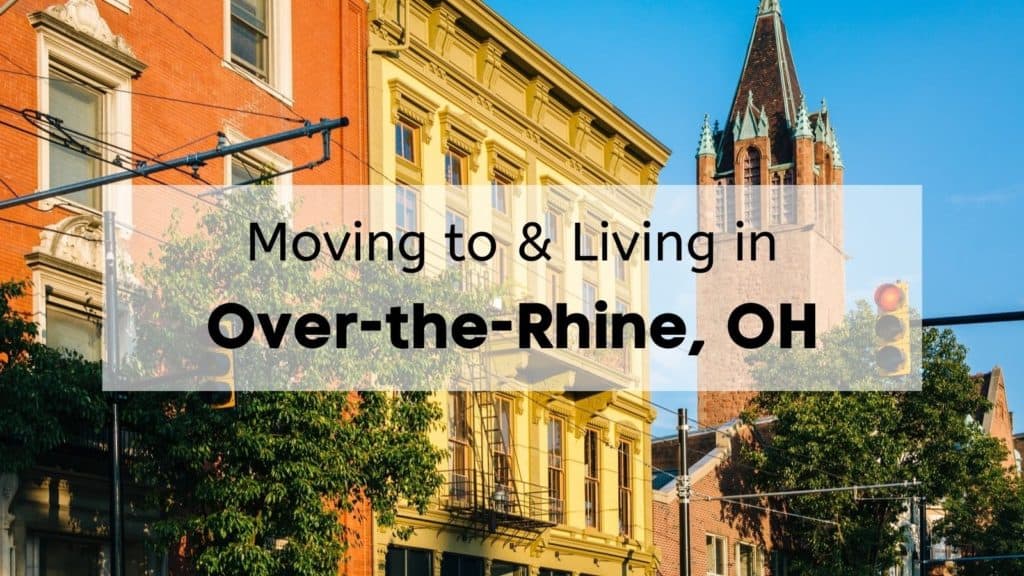 Over-The-Rhine, as the name implies, was a colony of German immigrants who settled in the cheap renting units of northern Cincinnati in 1849, arriving from Germany after the failed 1848 revolution. By 1850, over 60% of the population was first generation German immigrants. Built over the Miami and Erie Canal, called “the Rhine” by its German residents, this neighborhood became a distinct community all its own, with many of its residents not even speaking English. It retained this character for about six decades.

Over-The-Rhine would come upon hard times in the 20th century, however. The German community here was culturally German and often celebrated German victories in World War I, but this was quickly put to a stop when the time came for U.S. involvement in the war. Germanophobic backlash resulted in the closures of German businesses, German schools, and more. Prohibition, closely linked with Germanophobia, specifically targeted the breweries that were responsible for Over-The-Rhine’s prosperity.

By the 1920s, Over-The-Rhine was destitute. World War II brought Appalachian migrants, who replaced the Germans, and development in the 1950s replaced the Appalachians with African-Americans. For quite some time, Over-The-Rhine was a poor and crime-ridden neighborhood. However, with the 21st century came renewed efforts to preserve and reinvigorate Over-The-Rhine, which has resulted in a serious reduction in crime and poverty, and a burst of new business opportunities.

Over-The-Rhine’s main canal was once vital to its economy, but nowadays is largely just a nice spot to relax, and an entryway to the neighborhood. Over-The-Rhine is entered via its multitude of bridges over the canal, most of which will put you in the so-called “Gateway Quarter”, the area where gentrification efforts have been the most successful. Heading north from there will put you in the Brewery District, where Over-The-Rhine’s revived alcohol industry has made its home, the same spot where Germans were brewing beer all those decades ago. In terms of road transport, the neighborhood is only a short distance away from most of Cincinnati’s largest highways.

Due to Over-The-Rhine’s poverty during the time where most cities, including Cincinnati, were upgrading their public transportation systems, there’s little in the way of these amenities here. However, many of Cincinnati’s bus lines, such as Go Metro, do run through the area.

You can definitely still feel the fact that Over-The-Rhine is still developing, but thanks to the old-fashioned layout of the neighborhood, much of it is still optimized for walking or biking. Over-The-Rhine’s location is right on the northern border of Cincinnati, just across the Miami and Erie Canal.

Over-The-Rhine is home to 5,763 people. Demographically, 46% are White, 45% are Black, and a meagre 2% are Asian. As with many other communities, there are also disparate communities of other ethnicities in neighborhood limits as well. Over-The-Rhine’s population is skewed towards men, with a gender ratio of 1.2 men to every 1 woman.

As we’ve stated many times before, Over-The-Rhine’s primary draw for many is its plethora of well-preserved historical sites. Such sites include a stunning array of different architectural styles, all built by inspired German architects in the 19th century. These include the Germania Building, the Music Hall, the Memorial Hall, and many of the residential and commercial buildings in the area.

Worried about crime in Over-The-Rhine? Over-The-Rhine still struggles with the vestiges of its crime and poverty-ridden past, according to Areavibes. However, one should keep in mind that this is a changing situation — since 2002, the crime rate here has dropped over 50%! Additionally, this is limited to only some areas. Choose the right spot for you, and you’ll never have to worry about crime!

What to Eat, Do, and Shop in Over-The-Rhine, Cincinnati, OH

When it comes to shopping in Over-The-Rhine, there’s simply no comparison to the Gateway Quarter. Situated just at the end of the bridges that enter the neighborhood, neighborhood renovation has been highly focused in this area, bringing in a variety of local businesses to help foster a unique shopping experience.

You’ll be certain to get hungry while living in Over-The-Rhine, and luckily for you, this neighborhood has a whole heap of excellent eateries and restaurants! Coming highly recommended by locals is Taste of Belgium. While not quite the German restaurant fitting for Over-The-Rhine’s heritage, Belgium is close enough, right? With delicious dishes and desserts from Germany’s close neighbor, their drinks are also great! Another highly recommended restaurant is Boomtown Biscuits & Whiskey, serving comfort food and hard liquor in a delightful combination.

The food here is great, but it’s hardly a boredom killer. Thankfully, between public parks and private attractions, there’s plenty to do in Over-The-Rhine! If you weren’t able to find quite what you were looking for in the Gateway Quarter, another popular shopping stop, as well as tourist attraction for its historical significance, is the Findlay Market, a public market operating since 1855. Another immensely popular attraction, or rather tour of attractions, is American Legacy Tours. A popular stop for tourists and locals alike, these tours will guide you to Over-The-Rhine’s most beautiful works of architecture, many of which are claimed to be haunted, or can guide you into Cincinnati’s abandoned underground. A thrilling tour to be sure!

Over-The-Rhine’s property prices are certainly not a bad deal, considering that the neighborhood is improving and will only continue to improve. The median sale price of a home in Over-The-Rhine is $290,000, although this can vary area by area. For an urban area of this kind, these prices are not bad, but take into special consideration the area you choose to buy property in. According to Redfin, the median amount of time for a house to be on the market in this area is 74 days, with only 2.6% of homes being sold below listing price.

Renting in Over-The-Rhine is generally the same story as buying property here, with the average monthly rent for all apartments being $1,099, variance by area applying in this field as well. Over-The-Rhine is still in the process of developing and growing into a community that is safe and profitable. However, that growth is occurring steadily and consistently. If you are someone who wants to live in the fastest-developing area of Cincinnati, there is simply no contest in this city when it comes to Over-The-Rhine.

If you’re interested in looking at listings for Over-The-Rhine’ homes, take a look at some Over-The-Rhine, Cincinnati, OH real estate options here.

Ready to take that last step and start your journey to making Over-The-Rhine your new home? Give Bell Moving a call! Our crew of highly-trained professional movers will ensure your move is a stress-free process at affordable rates! Call now at 513-942-7500 or fill out our online form for a free quote!