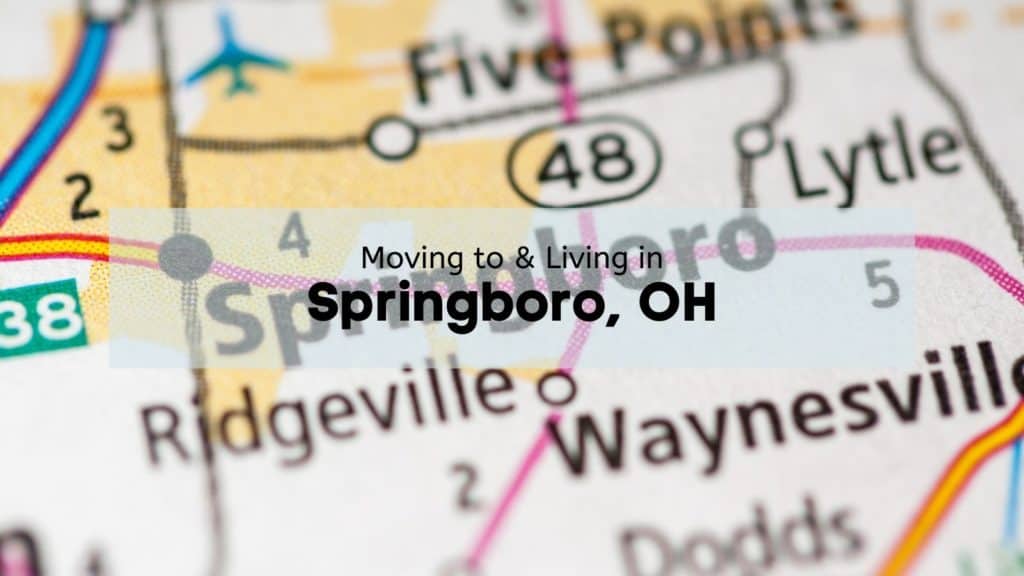 Located in Warren County, this suburb of Cincinnati and Dayton is best known for its motto, “Live. Work. Play. Learn. Grow.” A primarily residential community, and quite affluent to boot, this charming little suburb is perfect for the family who works out of Cincinnati or Dayton — or both! The suburb even has its own airport! Springboro wasn’t always called Springboro, though. In fact, when the town was first founded in the early 19th century, it was called “Springborough”, named so by the Quaker Johnathan Wright. During most of the 1800s, Springboro was a little farming town of little note, outside of being one of the stops on the Underground Railroad. However, in the 1960s, the population exploded in relation to Dayton’s growth, and the area became very wealthy very quickly. Nowadays, Springboro is even home to a few notable people, notably Arizona Diamondbacks player Tony Campana and Blondie guitarist Tommy Kessler.

The town of Springboro has a population of 18,196 distributed over 9.3 miles at a population density of about 2,000 people per square mile. The median age here is 36.9, which is a little younger than the Ohio average of 39.4. The median household income in Springboro is $107,225, which is almost double the average household income for the state of Ohio, being $56,602.

Springboro is a very homogeneous place, with 92% of the population being Caucasian, as well as a very small Hispanic population, about 3% of the community’s residents, and several other small ethnic minority groups as well. Springboro’s gender ratio is skewed towards females, being 52% of Springboro’s population.

Springboro’s zip codes are 45066 and 45352, while the area codes are 937 and 326. To the west, the community of Franklin directly borders the little suburb, as well as Carlisle. As previously stated, both Dayton and Cincinnati are within driving distance, although Cincinnati will be a tougher commute.

Thinking about moving to this community, but wondering if Springboro is a safe place to live? While Springboro doesn’t get out the greatest score on Areavibes, the crime rate here is still 4% lower than the national average, and it’s among the top 20 safest cities in Ohio. Property crime here is 7% lower than the US average, but violent crime is up from the average by about 13%. In terms of crime, Springboro is among the safest places in the state.

Cost of Living in Springboro, OH

Although it is an affluent community, Springboro is actually relatively affordable when compared with the rest of the United States, with the cost of living here being 9% lower on average than other places in America, according to Payscale. Homes in Springboro are more than 1.5 times the cost of a home in Ohio, with the average home costing you $227,600, but this is still low when compared to the national average. If you choose to move to Springboro, you can also expect to pay less for utilities, transportation, and groceries. Renting in Springboro isn’t the cheapest in America, but it sure has bang for its buck when compared to urban centers at $1,165 per month.

Springboro has all the benefits of an affluent community without the exorbitant cost of living! There are few communities that can say the same.

There are many excellent schools in Springboro and the district that serves the area is the Springboro Community City School District. Worried parents won’t have to worry anymore, because over 80% of the schools in this district are rated Above Average by GreatSchools. Some highlights in terms of local schools include Dennis Elementary East, Springboro Intermediate School, and Springboro High, which has a 9/10 rating. Rest assured, your child will be sure to succeed while you’re living in Springboro!

Springboro’s climate isn’t California, but it’s not quite as severe as other places. Quite a bit of rain, but not as much snow. You can expect lows of 21 degrees Fahrenheit during the winter months, and highs of 85 degrees Fahrenheit during the summer months. Springboro experiences slightly more than the average amount of rainfall when compared with the rest of the United States, with 40 inches per year as compared to 38. Meanwhile, Springboro also experiences around half the snow of the average, with 12 inches as compared to 28. The best times to visit Springboro, in terms of comfort rating, are June and September.

Springboro is among the most desirable suburbs in the Cincinnati area, and has plenty of smaller subcommunities to check out! Check out some of your neighborhood options below:

Springboro’s most expensive portion is to its south, the Utica area, as this area is the closest to Cincinnati. Predictably, the most affordable area is the polar opposite of Utica, Springboro Pike up in Springboro’s north. However, there’s few reasons to stress about choosing which Springboro neighborhood you want to be a part of, as all will be the same delightful Springboro experience!

If you want to make yourself a part of any of these communities, you should check out the latest listings for homes for sale in Springboro, OH.

Those planning on making a living in Springboro should know that wages and cost of living have generally been stable here, according to Payscale. The most popular positions of employment are Registered Nurse, Drill Press Operator, and Licensed Practical Nurse. The largest employer in the area is Atria Senior Living Group, Children’s Medical Center of Dayton, and Hardy Diagnostics. The average salary for a worker in Springboro is $68k a year, while the average hourly wage is $18.09.

Springboro is a place with plenty of economic opportunity, and a job in healthcare or technical labor can get you far here. Check out the latest listings for jobs in Springboro, OH here.

Things to Do in Springboro, OH

Sometimes, you want to feel like a king or queen for a night. And what could possibly be classier than an exquisite carved meat dinner served by professional chefs while performers perform musicals and plays? La Comedia is probably among the most unique dining joints in Springboro, and has remained a local favorite for a reason!

Need to relax after a long day? Kids want to run around outside? North Park is your spot in Springboro. The highest rated park in the area, North Park has a basketball court, concession stand, lacrosse field, and more.

Places to Eat in Springboro, OH

Alongside its host of things to do, Springboro is also home to plenty of great eats! Check out some below:

Want to eat out at a grill? How about a tavern? What about a grill and a tavern… At the same time? Doubleday’s serves great grill fare and drinks and more, perfect for a night out in Springboro!

This lovely family-owned chain prides itself on its country theme, born out of a farm in Ohio. Serving the very best of rural cuisine, Bob Evans has cemented itself as a favorite amongst Springboro residents!

Ready to take that last step and start your journey to making Springboro your new home? Give Bell Moving a call! Our crew of highly-trained professional movers will ensure your move is a stress-free process at affordable rates! Call now or fill out our online form for a free quote!