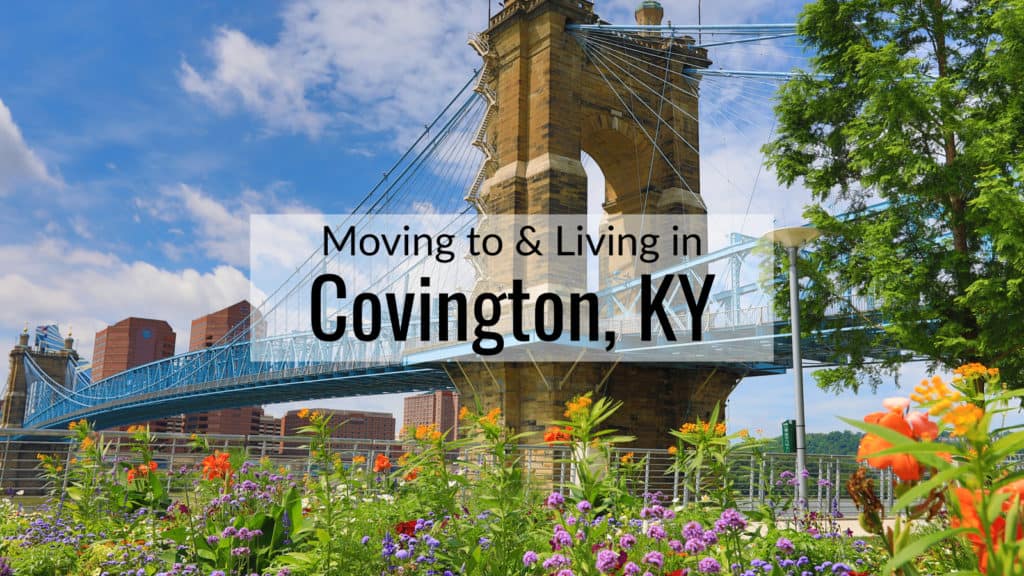 Located a mere two miles from Cincinnati, Covington is one of the most beautiful cities of middle America. Originally known for its expansive cigar and tobacco industry, Covington today is known for its manufacturing, government operational centers, and beauty. Known as “The Point” in the early 1800s, this community was named “Covington” after a fallen commander of the War of 1812 during the laying out process, which formally began in 1815. Covington would officially become a city in 1834, where it would prosper due to its previously mentioned tobacco industry. Eventually, the tobacco industry here would wane in importance, leading to manufacturing becoming the most important part of the city’s economy by 1900. Today, Covington is a stunning, yet affordable, city with a strong Catholic background, being one of the most Catholic places in Kentucky, as well as being home to plenty of Roman Catholic churches and schools.

Covington is in Kenton County KY and sits at the intersection of the Ohio and Licking Rivers. Covington, KY is a somewhat small city, with a population of 40,552 residents spread out over Covington’s thirteen miles of space at a rate of 3,000 people per square mile. It’s the fifth-most populous city in Kentucky. This city is also fairly young, with an average age of 36 exactly, not unusual for cities of its size. Demographically speaking, Covington is majority Caucasian, with whites being 79% of the population, but also has significant black and Hispanic populations, being 11% and 5% of the population respectively.

Thinking about moving to Covington, but worried about crime? Unfortunately, Covington, like most big cities in America, does have a crime problem. Crime rates here are 21% above the national average, with property crime 23% more, and violent crime only being nominally above the average at 7%. However, don’t let this discourage you! Covington is a big place, and there’s plenty of safe communities for you and your loved ones!

Cost of Living in Covington, KY

Healthcare is more expensive than the national average, but only by 1%. You can generally expect to pay around $111.37 for the average doctor’s visit, while the average dentist visit in Covington costs around $95.68.

Covington, KY is bustling with opportunity, and won’t strain your wallet!

Covington is served by the Covington Independent Public School District, the largest of its kind in Kentucky. Alongside managing the various schools within the city, they also host events, camps, Q&A’s, and more, so that your child has the best experience possible and is set on the path to success early. Excellent local institutions of learning like Glenn O Swing Elementary School and Holmes High School will ensure your children are equipped with all the education necessary to succeed!

There’s also plenty of great options for higher education in Covington, KY! Being right next to Cincinnati has its perks, with quick access to the excellent University of Cincinnati, as well similarly prestigious Xavier University, which is a private Jesuit university.

Covington, like most of Kentucky, doesn’t get extremely cold or hot, but does have significant amounts of humidity. You can expect highs of 86.3 degrees Fahrenheit in the summer months, and lows of 22.1 degrees Fahrenheit in the winter months. You can also expect more rain than average, 44.6 inches yearly compared to 38.1 inches, but less snow, 14.4 inches as compared to 27.8. If you’re planning on visiting Covington, the weather is generally the best in June and September.

A post shared by City of Covington, KY (@covingtonkygov)

Covington lays claim to 19 separate neighborhood districts, most of which are located in the northern historic portion of the city. Almost all of them have neighborhood associations, which bring residents together to make their neighborhoods more beautiful, as well as safer.

If you want to learn more about Covington’s expansive neighborhood association system, you can check out the Covington Neighborhoods page here. Additionally, you can find a list of some of the best Covington, KY neighborhoods below:

Interested in Covington, KY homes for sale? You can check out current listings here.

Those looking to make a living in Covington, KY will be glad to know that wages have been increasing while cost of living has been going down! The most popular employers in Covington are Fidelity Investments, Transitions, and Northkey Community Care. Meanwhile, the most prolific positions here are executive assistant, software engineer, and substance abuse counselor. The average hourly wage in Covington is $15.57, while the average salary here is $53k per year.

Nowadays, Covington has lots of opportunities for those of you talented in the fields of bureaucracy, as many important firms and government agencies operate out of the city. If you’re interested in perusing the latest job openings in Covington, you can check out currently open jobs here.

Things to Do in Covington, KY

Covington, KY has plenty of convenient shopping, with excellent plazas like Newport on the Levee and Newport Plaza II. Covington is also home to plenty of fun attractions for the whole family! Check out a sample of just a few of the great things to do during your stay in Covington!

Cathedral Basilica of the Assumption

Devou Park is a beautiful and expansive open park with all kinds of activities contained within, from an ampitheatre to a golf course. This is a surefire way to have a blast with the whole family!

That’s not all! See some of Covington’s other fun activities below:

Places to Eat in Covington, KY

If you thought Covington didn’t have any good eats, you couldn’t be more wrong! Check out some of the best restaurants in Covington, KY below.

Craving authentic German cuisine in Covington? Look no further than Wunderbar! With real German chefs, and a selection of dishes from all over Deutschland, this one is sure to tickle your Lederhosen!

Molly Malone’s pub is the real deal — a true Irish Pub right here in Covington! Be sure to visit if you want a great selection of craft beers and Irish dishes.

Tips for Moving to Covington, KY

Thinking about moving to Covington, KY? Thankfully for you, Bell Moving has got everything you need! From storage to friendly and professional moving crews, Bell Moving is sure to make your relocation a breeze! Start your Covington, KY moving journey today!