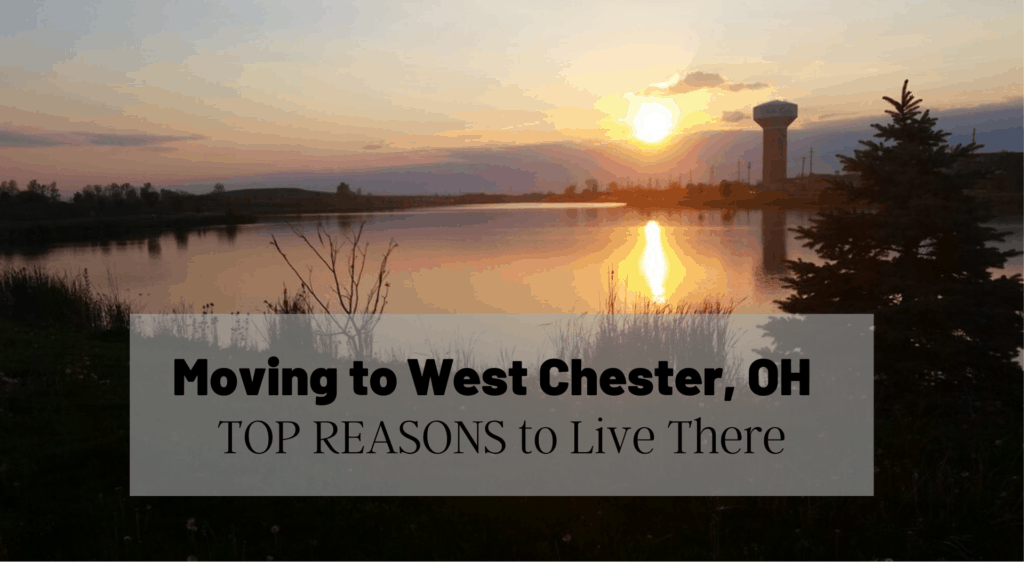 Moving to West Chester OH (2022) | TOP REASONS to Live There

West Chester, officially West Chester Township, is located just 23 miles north of Cincinnati. This fairly small city has been named as one of the top 50 best places to live and it’s no surprise coming from a city with the motto “where families grow and businesses prosper.” Originally founded by German and Irish farmers in the early 19th century, one of the most interesting things about West Chester is it was once had 11 Native American mounds and it’s one of the best places in North America to find fossils.

Is West Chester a good place to live? Definitely, if you’re looking for affordable yet great quality of life, excellent employment opportunities, and endless opportunities for recreation. Thinking about moving to West Chester? Here’s absolutely everything you should know first.

West Chester Township has a population of about 64,000 but it’s definitely on the rise, driving growth in Greater Cincinnati and Ohio as a whole. Thanks to its affordability, quality of life, and strong economy, living in West Chester is only getting better.

Curious about your neighbors after moving to West Chester, OH? Residents are highly educated with over 52% holding at least a college degree. The community has a high rate of homeownership and great schools which makes it a wonderful place for families. West Chester has an average household income of $115,500, far above the U.S. median of $63,000. With many new developments in the works, West Chester is experiencing a booming real estate market with a median home value of $257,000.

Like much of southwest Ohio, West Chester has pleasant weather without freezing winters or brutal summers. The summer high is usually around 87 degrees and it gets as cold as 21 degrees in January, the coldest month. West Chester gets a fair amount of rain at 43″ per year, above the U.S. average of 38 inches, but it snows just 14 inches per year, well below the national average.

To prepare for living in West Chester, invest in a good raincoat and umbrella and learn to enjoy overcast but comfortable days!

West Chester is a business-friendly township that has made amazing strides in developing a thriving and diverse economy while delivering a balanced work-play life for residents. In fact, it’s one of Ohio’s best regions at creating jobs with rapid job growth in logistics and health care with a projected job growth rate of almost 4.5%. Other major industries in West Chester include manufacturing, financial, and education.

Top employers in West Chester include:

If you’re thinking about moving to West Chester, Ohio, you won’t have any trouble finding a rewarding career with an average commute of just 23 minutes. Ready to explore new career options? Start your search for West Chester jobs on Indeed and Simply Hired.

West Chester is home to dozens of beautiful neighborhoods including many new construction and established subdivisions, condo developments, and upscale communities with custom stone homes. Ready to explore exciting or family-friendly West Chester neighborhoods? Here are some of the best.

Beckett Ridge is one of the largest communities in West Chester. It’s made up of more than 2,000 properties in 21 different neighborhoods with five recreational areas, 300 acres of outdoor space, and the Beckett Ridge Country Club. Beckett Ridge features affordable condos as well as luxury homes that reach $700k. The Preserve and the Landings at Beckett Ridge are two popular apartment complexes with upscale amenities starting at $1,300 per month. You’ll also find 3- to 6-bedroom single-family homes with plenty of land in the community.

One of the most desirable neighborhoods in West Chester is Reserves of Providence, a luxury home community featuring palatial custom homes in many architectural styles with home prices that can top $850k. If you’re looking for luxury, the Treilage West Chester neighborhood is another good option with large, wooded lots, valley views, and upscale amenities like wine cellars.

Planning to buy a home after relocating to West Chester? Start your search for West Chester, OH homes for sale online to get an idea of which neighborhoods are within your budget and needs.

Considering higher education? West Chester is close to several universities and colleges including the University of Cincinnati-Blue Ash campus, Cincinnati State in Middletown, and Miami University, one of the oldest Public Ivy universities in the U.S., with campuses in West Chester, Oxford, and Hamilton.

Top Restaurants & Things to Do in West Chester, OH

West Chester Township is home to endless things to see and do with a great mix of outdoor recreation, shopping, and attractions. West Chester, OH also offers convenient shopping including Target, Kroger, Home Depot, the massive outdoor Liberty Center Mall, and IKEA, one of only two in all of Ohio. Whether you’re looking for fun things to do on a date in West Chester or neat things to do with kids, here are some of the best restaurants and attractions in the city.

Topgolf is West Chester’s leading entertainment destination with a lounge and upscale driving range. Enjoy a variety of games with microchipped golf balls to track every shot that’s relayed to the bay screen or try the world’s most iconic golf courses in virtual reality.

Visit the world’s largest train display at EnterTRAINment Junction — one of the best things to do in West Chester with kids. Explore three eras of rail history beginning in the 1860s and end at the Imagination Junction where kids can enjoy train-themed activities.

Twin Dragon is one of the best restaurants in West Chester when you’re craving quality Chinese food with modern takes on classic dishes like Hunan style beef and chicken chow mein.

Get ready for tasty drinks and unbelievably good ribs at Smokey Bones, a West Chester favorite. Ribs are slow-cooked and there’s always lunch specials — a perfect place to stop for your lunch break or with friends!

What Is the Cost of Living in West Chester, OH?

Are you prepared for moving to West Chester, OH? This vibrant community, already one of the best in the country, is only getting better with more opportunities to live, work, and play. Count on the trusted West Chester movers at Bell Moving & Storage to help you get there without the stress and hassle.