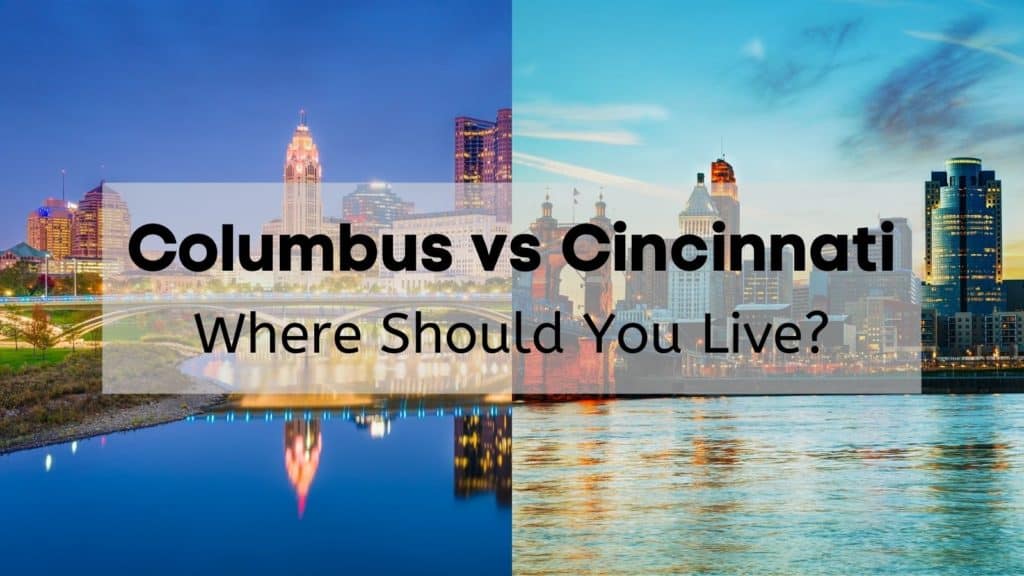 Columbus vs Cincinnati [2022] | Where Should You Live?

Cincinnati and Columbus may be very close, but they feel worlds apart. Columbus is famous for Ohio State University, college football, and its park system while Cincinnati is known for chili, cultural attractions, theme parks, and its historic architecture. If you’re trying to decide between these two Ohio metro areas, there are many things that set them apart.

Here’s how Columbus vs Cincinnati compare and contrast to help you make your decision.

Pros & Cons of Living in Columbus vs Cincinnati

Which city is right for you, the Queen City on the Ohio River or the Discovery City on the Cuyahoga River? Here are some of the biggest pros and cons of living in Cincinnati vs Columbus.

Columbus is a great city for football

One of the biggest pros of living in Columbus for sports fans is the Ohio State Buckeyes. Columbus is, above all else, a college football city with a culture revolving around football and the Buckeyes.

Columbus has a thriving and diverse economy

While most cities in the Rust Belt have withered with declining populations and weakening economies, Columbus has been a success story. Its population increased a whopping 11% between 2010 and 2018 alone with more young, educated people moving to the city.

One of the pluses of living in Columbus is you’ll find great-paying careers in many industries including medical research, tech, education, defense, banking, aviation, and insurance.

When you compare Columbus versus Cincinnati, you’ll see the two have economies very similar in size although Cincinnati’s is a bit less diverse. Cincinnati is primarily a finance and banking city.

One of the biggest advantages of living in Columbus? It’sIts exciting art and music scene. The art scene in Columbus has exploding in recent years with public art, professional troupes, independent artists, galleries, and museums around every corner. It was even ranked the 6th Best City for Culture in the U.S. by Business Insider.

You can take in the art scene in the Short North Arts District, the Columbus Arts Festival, and through public art.

There’s more than just art to explore too. Columbus has some of the best entertainment venues in the region like the Schottenstein Center, Express Live, and the Nationwide Arena.

Columbus doesn’t have the best schools compared to Cincinnati

If you have kids, the quality of the public schools may be enough to tip you toward Columbus versus Cincinnati. While Columbus has the largest school district in Ohio, Cincinnati school districts are among the best in the state.

Of the top 10 high schools in Ohio, four are in Greater Cincinnati including two of the top three schools in the state. Columbus only claims one and it’s in the suburb of Bexley.

Cincinnati Has a Fun Nightlife

Cincinnati’s Over the Rhine neighborhood, usually just called OTR, is America’s largest preserved historic district. Long a population center for German immigrants, it suffered from urban decay until it was revitalized into a fun nightlife destination.

One of the perks of living in Cincinnati? You’re walking distance from the business district to OTR & more! You’ll find exciting destinations like Ghost Baby – a social and music lounge underground in a long-abandoned 160-year-old brewery tunnel – and 16-Bit Bar and Arcade.

From downtown, you can also walk to football and baseball games on the river, the brand-new ICON Music Center for top music acts, and across the bridge to Newport, Kentucky for more nightlife options!

Cincinnati has some of the top entertainment attractions in the Midwest

Looking for a great place to live for young professionals, millennials, and young families? One of the positives of living in Cincinnati is it was recently ranked as one of the top 10 out of 150 cities for young professionals. The ranking considered factors like the city’s percentage of residents between 25 and 34, unemployment rates, median rent, cost of living, density of entertainment, and median earnings.

Why did Cincinnati stand out? It had the 5th lowest median rent among the country’s 150 largest cities and the lowest percentage of median earnings (only 19%!). Young professionals enjoy not only a low cost of living and strong economy but an incredibly walkable downtown. There’s an entertainment district in Over the Rhine and another across the river in Newport, Kentucky within walking distance.

Cincinnati does not have good public transportation

One of the biggest drawbacks of living in Cincinnati is it’s a very car-dependent city. It’s home to America’s largest abandoned subway system which was never finished. The streetcar and Metro bus system are helpful for getting around downtown, but that’s about it.

When you compare and contrast Columbus vs Cincinnati, you’ll find public transit in Columbus is more robust.

Cost of Living in Columbus vs Cincinnati

Home prices in Columbus versus Cincinnati are around 10% higher: $245,000 compared to $225,000. The Columbus real estate market is more competitive with homes selling faster and with more offers.

Additional Things to Consider Between Columbus Versus Cincinnati

Do you prefer a dense urban environment or do you want to be surrounded by more space? Columbus has twice as many people as Cincinnati, yet the two cities have almost the same population density.

Is crime a big concern when you compare Cincinnati vs Columbus? While Columbus has a crime rate that’s 53% above the national average, Cincinnati has a higher crime rate.

Just remember that a city’s crime rate is not a good indication of your risk of being the victim of crime. In many cities, violent crime is often concentrated in just a few neighborhoods. In the safest neighborhoods in Cincinnati, for instance, crime is 17% below the national average.

Sports in Columbus vs Cincinnati

Columbus has the Ohio State Buckeyes, a college football team with a fervent following. One of the plus sides of living in Cincinnati is rooting for several major league teams: Cincinnati Reds (MLB), Cincinnati Bengals (NFL), and FC Cincinnati (MLS).

When you compare Columbus versus Cincinnati, you’ll find Cincinnati definitely comes out ahead for its major league teams.

Hoping to avoid living in traffic? Don’t use it to help you decide between living in Columbus compared to Cincinnati. The two cities have equally bad traffic. Cincinnati has the 40th worst in the country while Columbus is 42nd. They’re the worst cities in Ohio for traffic.

Love to travel? When choosing a city to call home, give some thought to the airport. It may not seem like a big deal until you find yourself forced to book costly and time-consuming connecting flights without nonstop options. Here’s how Columbus versus Cincinnati airports compare.

Cincinnati is served by the Cincinnati/Northern Kentucky International Airport (CVG) about 15 minutes outside downtown. Columbus is served by John Glenn Columbus International Airport (CMH) minutes from downtown. Both are ranked among the best regional airports in the U.S., and CVG is one of the top 5 regional airports in the world!

When it comes to airlines and destinations, you’ll find both are a bit limited. While they’re international, both have routes that are mostly domestic. Fares are also a bit high as they’re regional airports but CVG has more affordable fares and more nonstop destinations.

Columbus vs Cincinnati: Where Are You Moving?

Now that you have some idea of the differences between living in Columbus versus Cincinnati, which city will you call home? If you prefer a city that feels newer with more jobs involving the service, education, and government industries, Columbus is a good fit. If you’re after beautiful architecture, history, and a city with its own culture, Cincinnati is calling your name.

If you have decided to make Cincy home, give the friendly movers at Bell Moving & Storage a call for a free moving quote. We look forward to helping you settle into your new neighborhood with a seamless moving experience.