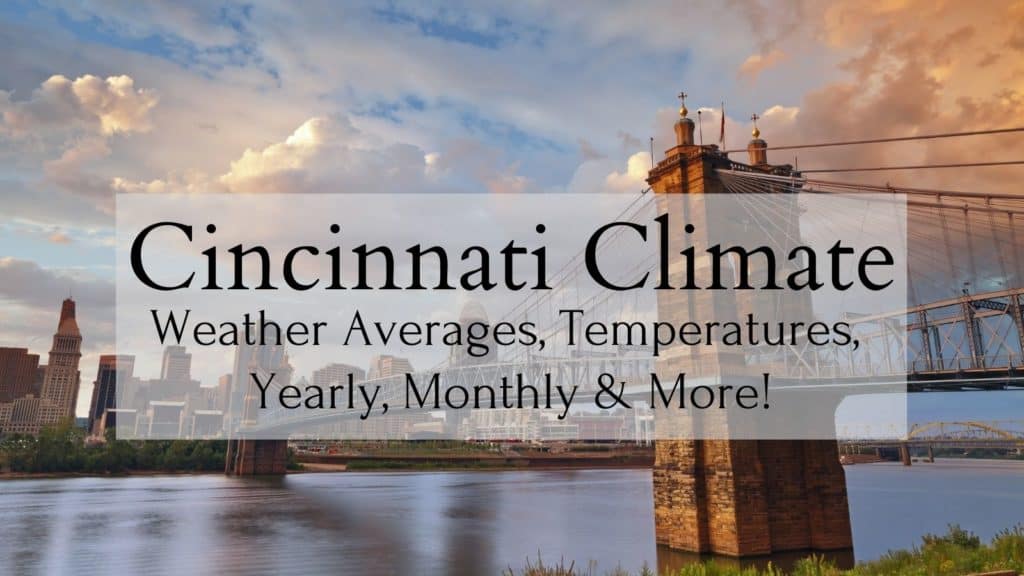 Cincinnati is located on the Ohio River in southwest Ohio right along the Kentucky border. The city is home to 302,000 people and known for its beautiful 19th-century Victorian and Gothic architecture, nationally ranked attractions, and affordable living. Cincinnati also boasts great weather – as long as you enjoy overcast days, rain, and humidity! Cincinnati is right at the limit of the humid continental climate zone but it borders the humid subtropical climate zone thanks to its southern location. Whether you’re visiting Cincinnati for a weekend or planning on moving to Cincinnati, you’ll probably want to know more about the Cincinnati climate and what you can expect.

Here’s a complete guide to typical weather in Cincinnati. Just keep in mind the difference between weather and climate: weather refers to short-term atmospheric conditions while climate represents the average weather over an extended period of time. Cincinnati weather is notoriously difficult to predict, but understanding the climate can help you know what to expect each month.

Spring in Cincinnati starts in March and ends in May. May, the last month of September, is one of the best times to visit Cincinnati before temperatures and humidity begin to ramp up. Spring is a very rainy season in Cincinnati. Between March and August, there’s a 31% chance of a wet day on any given day. This peaks on May 18 when the chance of a wet day reaches 40%. The most rainfall happens during the 30 days centered on May 13 with an average of 4.1” inches. Between March and May, expect 27 days of rain. Average temperatures in spring range from 34° to 75°F.

As the weather starts to warm up, you’ll find plenty of things to do in Cincinnati. Visit the best Cincinnati museums, check out entertainment at The Banks downtown, and enjoy the animals starting to come outdoors at the Cincinnati Zoo.

Summer in Cincinnati starts in June and ends in August. Cincinnati has warm, humid summers. To some, the humidity can be a little rough, especially for those with asthma or breathing difficulties. The average humidity in summer is about 73% with average summer temperatures between 61° and 86°F. You’ll see around 23 days of rainfall on average during the summer.

Despite the heat, there are plenty of ways to stay cool and enjoy everything summer has to offer in Cincinnati. Visit Coney Island to beat the heat at the world’s largest recirculating pool, ride a boat down the Ohio River, and enjoy summer festivals like the Bunbury Music Festival and the Cincinnati Celtic Festival.

Fall in Cincinnati starts in September and ends in November. Autumn is pleasant in Cincinnati with chilly but pleasant temperatures, humidity that isn’t unbearable like summer can be, and a fair amount of rain, which is common throughout the year. Average fall temperatures in Cincinnati range from 46° to 78°F with 20 average days of rainfall.

One of the best things to do in autumn in Cincinnati is driving to see the leaves change colors, enjoying the best parks in Cincinnati while the weather is crisp, and enjoying the city’s popular fall events and festivals. Pick pumpkins and apples at one of the region’s many farms and orchards, visit the zoo for the annual HallZOOween event, and celebrate Octoberfest during Oktoberfest Zinzinnati, the world’s largest Octoberfest outside Germany.

Winter in Cincinnati starts in December and ends in March. Cincinnati gets chilly but fairly mild winters, although sometimes the region experiences cold snaps. Winters are usually light on precipitation with an average of 15 inches of snow per year, almost half the U.S. average. Winter temperatures range from lows of 20° to highs of 43°F. There are just a couple of nights per year when the nighttime temperature reaches 0° or below.

There are plenty of things to do in Cincinnati in the winter including ice skating at the Fountain Square ice rink, open from November 7 through February 15, and the Cincinnati Zoo Festival of Lights, ranked the Best Zoo Lights in the United States.

Be prepared with gloves and winter coats in January, the coldest month in Cincinnati. In the middle of the winter season, the average temperature in Cincinnati in January is 23°F to 38.7°F. January gets the most snowfall in Cincinnati along with February.

February is the last month of winter and very chilly. The average Cincinnati temperature in February is 26.1° to 43°F.

March marks the beginning of spring in Cincinnati but temperatures remain chilly. The average temperature is 34° to 53.2°F.

This is when the Cincinnati weather starts to warm up and humidity is at its lowest. The average temperature in April is 43.7° to 64.8°F.

May marks the last month of spring and it’s one of the most pleasant months in Cincinnati with average temperatures between 53.2° and 73.8°F. The nursery rhyme may say that April showers bring May flowers, but in Cincinnati, the rain really picks up in May. You’ll need your umbrella as May gets the most rainfall out of the year with 12.8 average days of rain and up to 4.9” of precipitation.

June is the best summer month to visit Cincinnati with warm temperatures averaging between 62.1° and 82°F.

In June, the temperature starts to climb along with humidity. This is the hottest month in Cincinnati with average temperatures of 66° to 85.6°F. At the height of summer, humidity is at 72% with 2.15” of precipitation on average.

August marks the end of summer in Cincinnati with average temperatures between 64.8° and 84.9°F.

October falls right in the middle of autumn with average temperatures between 45.5° and 66.2°F. You’ll get an average of 1.29” of precipitation in October.

The end of autumn brings dropping temperatures in Cincinnati with an average low of 36.1° and an average high of 54°F. November gets an average of 1.42” of snow and rain.

December is the beginning of winter in Cincinnati with chilly temperatures averaging 26.6° to 41.5°F. The average precipitation is 1.72”.

There are two types of extreme weather in Cincinnati to worry about: extreme floods and tornadoes. Cincinnati experiences fairly frequent thunderstorms and, with its location right on the Ohio River, the region is very familiar with flooding.

The Ohio River regularly reaches flood stage, especially in February. The worst flood was the Ohio River Flood of 1937 which affected the Ohio River Valley from Pittsburgh, PA to Cairo, IL, leaving 1 million people homeless. The Cincinnati Flood of 2018 was also serious with water levels along the riverfront at the highest point since 1997 when the river crested at 60.53 feet.

Tornadoes can occur any time, but tornado season in Cincinnati is May, June, July. Over half of the tornadoes that hit Ohio occur in these months. Cincinnati was recently ranked as the most tornado-prone city in the United States. In two days in April 2020 alone, 19 tornadoes touched down in the Cincinnati and Northern Kentucky area.

Early summer and early fall are the best times to visit Cincinnati. The most pleasant months are September, May, and June when temperatures range between 70 and 85° and the humidity isn’t too high. During these months, you’ll experience not only the most pleasant temperatures and bearable humidity levels but the most activities to enjoy.

Cincinnati is known for its many outdoor festivals and events, as well as its riverfront lifestyle, amazing parks, and amusement parks. Kings Island, the Cincinnati Zoo, and Coney Island are popular attractions for residents and visitors alike in the spring, summer, and fall. You’ll be able to enjoy music festivals, boating, swimming, fishing, hiking, and more.

Ready to explore everything Cincinnati has to offer, regardless of the weather? Despite some extreme weather, humidity, and rain, you’ll still fall in love with the Cincinnati climate that allows you to enjoy the great outdoors year-round without the extreme heat and cold of many regions. If you’re set on relocating to Cincinnati, call the trusted Cincinnati movers at Bell Moving & Storage to find out how we can help and request your free moving estimate.