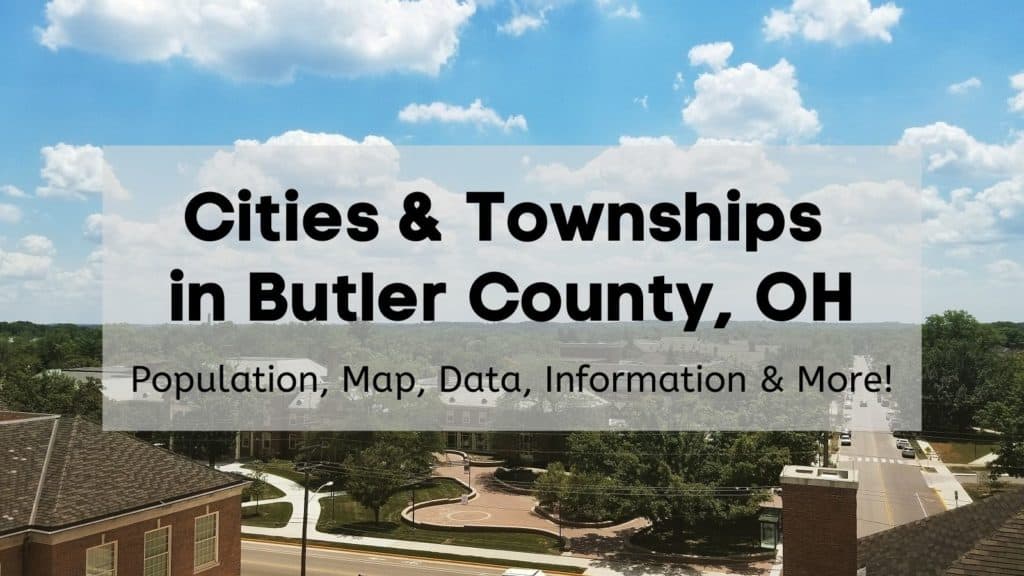 Are you visiting Greater Cincinnati or thinking about moving to the area? Butler County, Ohio is home to some of Cincinnati’s best suburbs, gorgeous parks and outdoor recreation, and excellent shopping, not to mention many of the best school districts in Greater Cincinnati.

A great way to learn more about the area is to explore the largest townships and cities in Butler County, Ohio by population. This guide covers the county’s major cities and townships, which are subdivisions of counties in Ohio and a form of local government that perform many services like parks and recreation, police protection, and road maintenance.

The county was founded in 1803 and named for Revolutionary War General Richard Butler who died in St. Clair’s defeat, the most decisive defeat in American military history.

Where is Butler County, Ohio? Butler County is located in southwest Ohio along the Great Miami and Little Miami rivers. It’s bordered by Hamilton County to the south (home to Cincinnati), Warren, Montgomery, and Preble counties, and Union, Franklin, and Dearborn counties in Indiana. 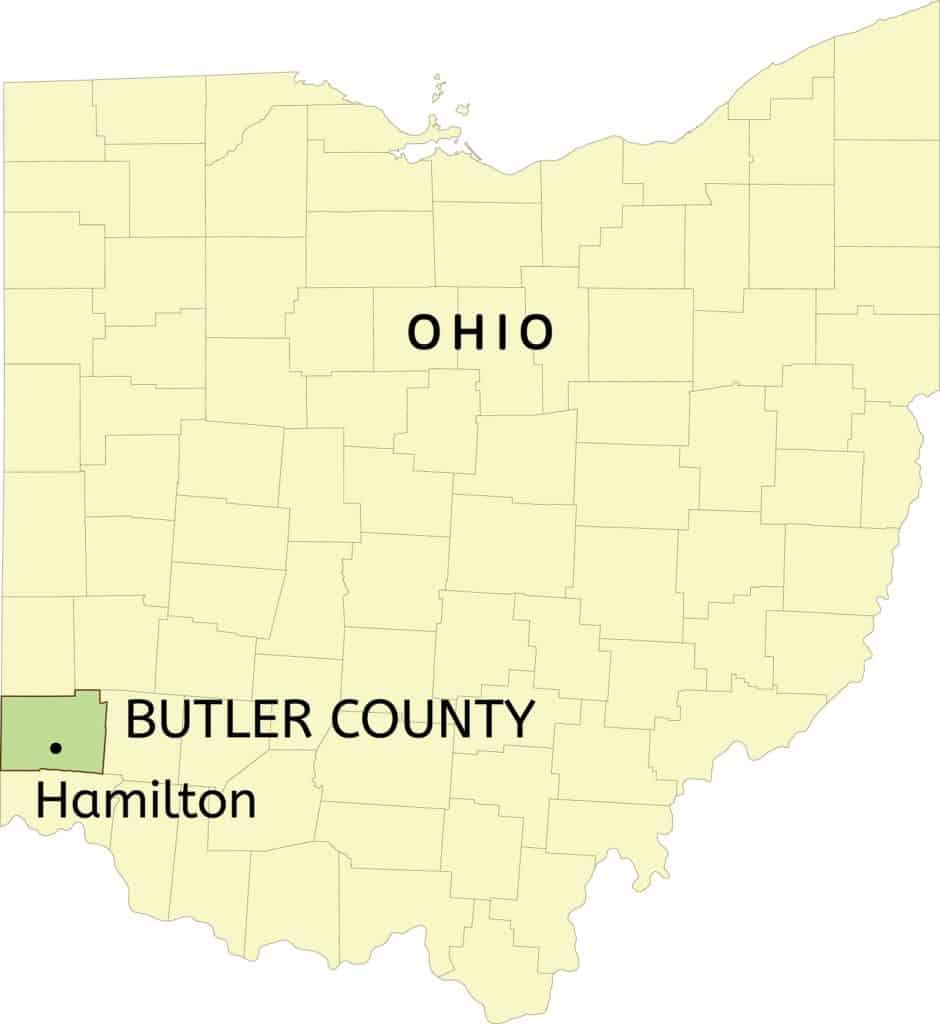 West Chester has been ranked one of the best places to live in the U.S. by Money magazine and it’s known for its family-friendly attractions, great schools, world-class parks, and excellent shopping and dining.

Learn more about living in West Chester, OH with our complete guide.

Hamilton is the county seat and the largest of cities in Butler County, Ohio. Just 35 miles north of Cincinnati, it’s the second-largest city in the Greater Cincinnati area.

Hamilton, Ohio offers a great quality of life with 17 parks, including Crawford Woods and the Pyramid Hill Sculpture Park & Museum, one of the top attractions in the region, and the Wake Nation water park.

Want to know more? Check out our complete guide to moving to Hamilton, OH!

The second largest of Butler County cities, Middletown is 35 miles north of Cincinnati in Warren and Butler counties. It offers an ideal location midway between Cincinnati and Dayton for greater employment and recreation opportunities.

Middletown is a great place to raise a family thanks to its low cost of living and quality of life. It’s one of the most affordable cities in Butler County, OH to buy a home! Kids and adults alike appreciate attractions like the beautiful Smith Park, Skateway Middletown, Land of Illusion Adventure Park – a haunted house in fall and a water park in summer.

The city is known for the Ohio Challenge Hot Air Balloon Festival held every July.

The city of Fairfield is the third largest city in Butler County, Ohio and the fourth largest municipality. Located in Hamilton and Warren counties, it’s located on the Great Miami River about 25 miles north of Cincinnati.

Not to be confused with Fairfield Township, from which the city withdrew, the city is home to one of Ohio’s largest school districts and known for its beautiful scenery, recreation, and attractions.

Fairfield boasts more than 300 acres of outdoor entertainment, sports facilities, and recreation including the fun Waterworks Park and William Harbin Park for mountain biking, disc golf, and hiking, and the Fairfield Fun Center for mini golf.

Want to learn more? Read our complete guide to living in Fairfield, OH!

Liberty Township, OH is the most affluent of all townships in Butler County, Ohio with a median household income of more than $123,000. It’s also the second most populous of townships in the county despite being the smallest.

Liberty Township is the second fastest growing of municipalities in Butler County, Ohio after the city of Monroe and southwest Ohio’s fastest growing area. Its population has climbed from 9,000 in 1990 to 22,000 in 2000 and it’s doubled again in twenty years.

Liberty Township, Butler County, Ohio is one of the best places to live in Greater Cincinnati with one of the region’s best school districts, plentiful job opportunities, and excellent recreation. It’s home to Fort Liberty Playground, several golf courses and country clubs, a paintball center, and Liberty Center, one of the region’s top shopping and entertainment complexes.

The city of Oxford is one of the top college towns in Greater Cincinnati. Home to Miami University, one of America’s oldest universities, Oxford has been rated as America’s Best College Town.

Oxford has a low rate of brain-drain which means it has one of the most educated populations in Butler County. It also has the youngest median age by far thanks to a student enrollment of 19,000 – the vast majority of the city’s population!

Along with the university, Oxford offers plenty to do including Yager Stadium, Goggin Ice Center, and the Oxford Community Park with an aquatic center and public pool.

Fairfield Township is best known for the picturesque Rentschler Forest MetroPark with river views and playgrounds. The main commercial area with shopping is along the Butler County Veterans Highway (Route 129).

Located in Warrant and east-central Butler counties, the city of Monroe is part of Lemon Township, Ohio. One of the smallest cities in Butler County, Monroe is an affluent community and the fastest growing Butler County, OH city. It’s best known for the Cincinnati Premium Outlets mall and Traders World Flea Market, the state’s largest vendor market with hundreds of indoor and outdoor vendors.

Learn more about what you’ll love about living in Monroe, OH with our complete guide!

The city of Trenton is located next to Middletown in northeastern Butler County. This small, residential city has one of the rates of high school and college graduates in the county, yet it’s one of the youngest cities in the area with a median household income higher than the state average. Residents enjoy a low cost of living with fairly affordable housing, great parks, and regular community events.

Despite being one of the largest Butler County, OH municipalities, Ross Township has a population of less than 10,000. Most of the population lives in an unincorporated area of the township. Ross Township offers a more rural atmosphere and it’s a gateway to popular parks and entertainment in the area like the nearby Stricker’s Grove amusement park.

How many townships are in Butler County, Ohio?

There are 13 Butler County, Ohio townships plus three paper townships.

What cities are in Butler County, Ohio?

What county is Liberty Township, Ohio in?

Where is Liberty Township Ohio?

Are you considering moving to one of Butler County’s great cities or townships? Give us a call at Bell Moving & Storage to discuss your upcoming relocation and request a free, affordable moving quote!