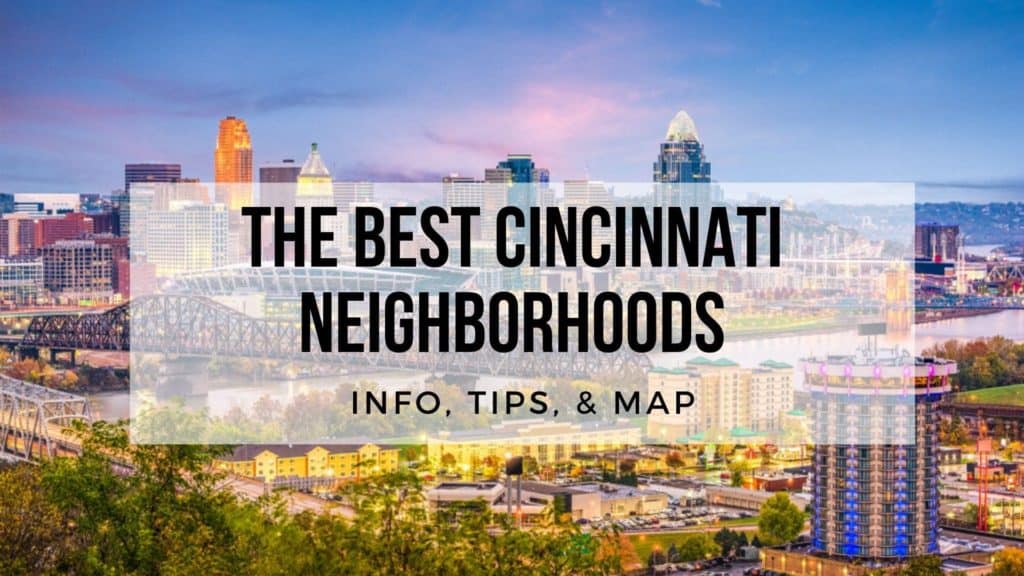 Cincinnati, OH is one of the largest cities in the state. From Cincinnati chili to Cincinnati caviar, this city is filled with delicious food, beautiful parks, and great neighborhoods. With 302,615 people living there, it’s no surprise that this is one of the most desirable places to move to. And when you’re researching where to live, the first thing you ask yourself is, “Where should I live in Cincinnati?”, meaning you have to look at all of the Cincinnati suburbs. It’s pretty time consuming because they’re all so different. Some neighborhoods are perfect for young professionals while others are great for families. You can spend hours doing research, or you can keep reading for the best Cincinnati neighborhood guide to find out for yourself!

Which Cincinnati Neighborhoods are the Best?

Branded as the best Cincinnati suburb to feel like you’re living downtown, Hyde Park is one of the most affluent places in Cincinnati to live in. From the gorgeous retail shops that are hip, expensive, and commonly shopped to the easy walking and jogging trails, many people hope to live in Hyde Park.

Hyde Park Square is located right in the center of the area, and it’s home to over 150 shops that are frequented often. Near Hyde Park, there are plenty of homes to choose from. However, most homes are in the $1,000,000+ range, so it’s not affordable for everyone. You can expect to find older families and those who are retiring. There aren’t too many young families or kids in this area. If you’re looking for wealthy living, this is the best area to live in Cincinnati. Plus, it’s also the safest neighborhood in Cincinnati.

Close to Hyde Park is the neighborhood of Mount Lookout. It’s a business district, but there are plenty of small homes, townhomes, and apartments to choose from. In fact, at the center of the square is Mount Lookout Tavern, which is known as the local hangout for college students and young professionals. This is considered to be a fairly trendy city, which is why you’ll find young people moving in.

There are wide sidewalks and plenty of lush green space that makes this a superior Cincinnati suburb for anyone who likes to run or jog. It’s also one of the safest suburbs in Cincinnati, with low crime rates and friendly neighbors.

Mount Adams may not be a real mountain, but it is a small hill that overlooks downtown Cincinnati for gorgeous city views. Small homes and slim streets are what you’ll find in this charming Cincinnati neighborhood. The median home values are $465,000. The architecture leans toward the traditional European style, so going to this place will make it seem like you’re in another country! Because of the quick commute to downtown, this is one of the best places in Cincinnati to live for young professionals with money.

You won’t find too many young families or children in this neighborhood because it lacks closeness to parks, sidewalks, and other family-friendly essentials. Instead, you’ll find trendy bars, live music, and one of a kind restaurants.

Over-The-Rhine, often abbreviated as OTR, is an up and coming neighborhood that is LGBT+ friendly. There used to be some danger going into this neighborhood at night, but this is now one of the best Cincinnati neighborhoods thanks to the revitalization efforts. The median home prices are $304,900. Filled with an artsy community, it’s known as the entertainment district in Cincinnati. Filled with restaurants, bars, clubs, and more, you’ll always have something to do.

As you can imagine, your neighbors will be young individuals who want to live in the party scene. However, this fun Cincinnati suburb changes on weekends thanks to Findlay Market, which is a farmer’s market and premier grocer market.

Indian Hill is truly where the richest half lives. There are plenty of mansions dotting the rolling green hills, and it was once dubbed the best place to raise a family in Cincinnati. If you have the money to do so, it is! The homes have large lots on a few acres, and the homes range from $1,000,000 to $4,000,000. Currently, there are plenty of families living there, but the kids are often older, like middle or high school ages.

Some people may say that West Chester is too crowded, but that’s just because it’s the most family friendly suburb in Cincinnati. Not only is it known for the affordable housing that brings many upper middle class families there, but it’s home to the EnterTRAINment Junction, which is a huge indoor train station exhibit where kids can play and explore. There are also plenty of parks in the area, and with so many families and kids, the schools are also exceptional.

You’ll find homes in the $200,000-$300,000 range, making it perfect for those who don’t mind a bit further of a commute downtown. Though most people who live here work in downtown Cincinnati, there are also plenty of school teachers and retail positions that people work at. One thing’s for sure–there’s plenty of parks and things to do in West Chester!

If you’re an urban person at heart, there’s nothing better than living in downtown Cincinnati. Filled with skyrises, trendy restaurants, and enough bars to spend days in, you’ll never grow out of fun things to do in Cincinnati. There are plenty of apartments and townhomes for sale, which you can expect to pay in the $100,000-$250,000 range. According to Numbeo, you can expect rent to be about $1,150 per month.

There are more than 13,000 people living downtown, and it’s known for being artsy and trendy. Though the majority of people are young professionals, there are some older professionals as well. Most people are single or newly married. Though downtown Cincinnati is considered to be one of the safest neighborhoods to live in, it does come with more crime than some of the others on the list. There are also many panhandlers downtown, and they hang out around the business district and apartment buildings. But if you work in the city center, there’s nowhere better to live!

Pleasant Ridge – Most diverse neighborhood to live in Cincinnati

Known for its wonderful arts district, Pleasant Ridge is the best place to live in Cincinnati if you’re looking for diversity. With people of all ages and ethnicities, you’ll be surrounded by a diverse, but safe, community. With an old feeling thanks to the gaslights throughout the streets lining the roads, people love the traditional feel.

The homes are smaller, single-family homes that are often rented out and shared. However, there are families with kids of all ages living here as well. You’ll find that most people are friendly and look out for each other. Though the city is flush with art and history, there are constantly new art pieces and murals being put around the city. Because of this, the city has become a bit of an attraction, with many people visiting Cincinnati stopping by. It can get a bit loud at night and there are many cars, so this isn’t the best place to live in Cincinnati if you have young kids.

Cincinnati is a beautiful city that’s home to some of the best Cincinnati neighborhoods to live. From diverse Pleasant Ridge to inspiring Mount Lookout, there’s a Cincinnati suburb for everyone to live in. If you’re researching these places and moving to Cincinnati, give Bell Moving a call. We’re a premium Cincinnati moving company ready to do all the heavy lifting for you!